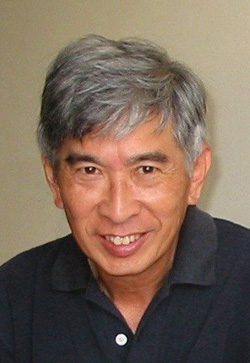 “Frailty, thy name is woman,” was the provocative Shakespearean title the thirteen-year-old picked for his first article to the august school newspaper. Splashed on the front page of the 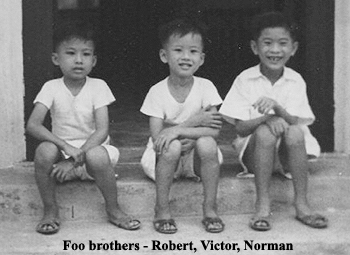 Seladang, it sparked a roiling fire storm among the indignant females of the school. The author’s comeuppance - if it could be called that - was to be made editor the following year of that very same publication. At the tender age of fourteen, he was its youngest ever editor. Norman Foo Yeow Khean had made his spectacular debut in the world.

Born in November 1943 in the Malaysian tin-mining town of Ipoh, Norman was descended on both sides from peranakan stock. His college lecturer father hailed from the Hakka Chinese dialect group, while his mother’s was Hokkien. The eldest of five siblings, he had two brothers and two sisters.

His western name was bestowed by his Roman Catholic paternal grandmother but he was never confirmed, a rather narrow

escape for a future agnostic secularist. From primary schools in Kuala Lumpur where the family settled, Norman joined the Victoria Institution (V.I.), the top English medium secondary school. Neither the school’s swimming pool, badminton and basketball courts nor its ample sports fields held much stock with him. He checked out the boy scouts but was a lousy cook at camp. He joined the judo club for a while and even learned a few judo throws.

It was among the well-stocked book shelves in the school library that the seeds of Western enlightenment were planted in the young Norman. Mentored by an eccentric Scotsman, who lived in the masters quarters a stone’s throw from the V.I., and by friendly seniors three or four years older than he was, the young Norman devoured the classics and books on economics, philosophy, and psychology. He was particularly smitten by the history, mythology and culture of Greece 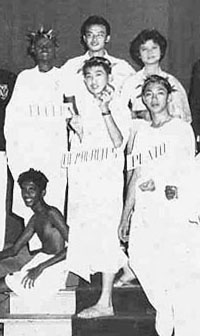 and Rome. In the process he turned into a life-long Hellenophile. Intellectually fortified, the new Seladang chief penned editorials and pseudonymous columns whose erudite subject matter and sheer bombast would send even eighteen or nineteen-year-old readers running for their dictionaries (and encyclopedias).

Norman’s cerebral forte at school included debating, acting, and writing. “Our brother,” one of his siblings complained, “grabbed the lion’s share of the family’s brains.” Indeed, after-dinner conversations with his dad were his daily high point. Norman represented the V.I. in debates, outwitting opponents with the very Socratic methods he had soaked up in the school library.

His pranks and foibles grew with his intellect. He concocted a spoof entitled “Socrates and Company” for his class 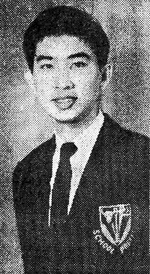 to perform in the school annual concert. "Geek Philosophers" would have been a better title for it featured a motley collection of statues of Greek intellectuals coming to life and cavorting in a museum. They ranged from Socrates to Archimedes to Pythagoras, while Norman cast himself as Democritus. His faux Greeks proceeded to unleash an unprecedented barrage of highly risqué jokes, allusions and double entendres. "Some parents were shifting uncomfortably at this," recalled Norman. His guerrilla tactics against authoritarianism were temporarily stilled, at least till the end of his school career, when he was made a school prefect and expected to maintain, rather than flout, discipline instead.

Inspired by his readings of Freud and Jung, he pioneered a new section in the school’s famed annual science exhibition, the popular Psychology Section. Academically, Norman bested his cohorts every year. He became the first person to win all the three scholarships awarded to those who topped their Form Four, Form Five and Higher School Certificate years. When he aced his School Certificate exams, the local press interviewed his classmates who breathlessly told of his aspirations to be a nuclear scientist. 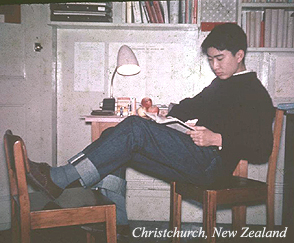 The truth when Norman finished school in 1962 was more mundane for that era. He was awarded a Colombo Plan scholarship to read electrical engineering in New Zealand. Exempted from the first year, he graduated in minimum time with First Class Honours and was named Senior Scholar to boot. He stayed on an extra year for his M.E. which he completed with distinction. As a bonded scholar, Norman returned to Malaysia in 1966 to serve as a telecommunications engineer with Telecoms Malaysia. He spent four years designing and testing all manner of antennas, impedance transformers, and transmission systems.

For his job he had to learn Fortran IV programming on an IBM 1130. Out of sheer necessity to debug his sub-routines and to control complexity, he practised “structured programming” long before that technique was even given 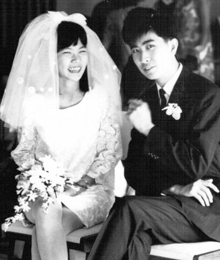 a name. Computer programming presaged a new career tack, for Norman now became interested in modelling and simulation, and the broader systems theory that was its foundation.

To this end, he applied for and won a Fulbright scholarship. Norman left for Ann Arbor, Michigan in 1968. But not before he tied the knot with Tan Yoke Lin, an alumna of the Convent Bukit Nanas and economics graduate from the University of Malaya. He enrolled in the University of Michigan’s Computer and Communications Sciences doctoral program to work on “the topological implications of simplifying dynamic systems using homomorphisms.” His interests now encompassed logic, computational complexity, analysis, algebra and the philosophy of science.

Norman returned briefly after his doctorate to Malaysia to seek an academic position in Computer or Systems Science, but there was none. Back again in 1974 in the U.S. he worked for a while on systems theory at SUNY Binghamton. It happened that his sister Ann was reading for her Masters in 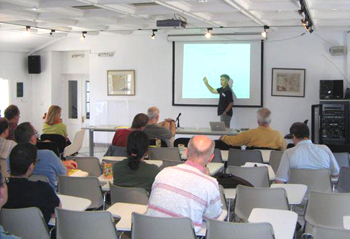 Economics at the same University. One day she turned to him to help solve an econometrics problem that had baffled her for a week. She gaped as her brother, who had no formal training in economics, read the problem, wrote the given equations on the board and in minutes derived the solution.

In 1975 Norman joined the Basser Department of Computer Science at Sydney University. Over the course of time he did two sabbatical stints at the IBM Systems Research Institute and T.J. Watson Laboratories in New York. In 1996 he held a personal chair as Professor of Knowledge Systems. He received a special investigator award from the Australian Research Council in recognition of his standing as a researcher of international renown.

Norman's intention had been to use Sydney as a listening post for academic opportunities in the land of his birth, but over time he was seduced by the ambience of the city, and after his second son was born 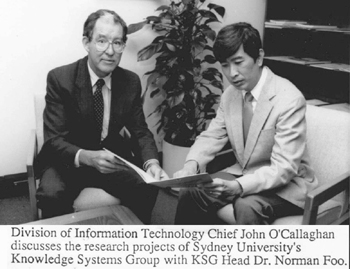 it was clear that Australia was now his country, even though emotionally Malaysia still owned his heart.

Norman was seconded to set up the Knowledge Representation and Reasoning Program of the National ICT Australia (NICTA) research institute in 2003, the leadership of which he relinquished in April 2005. He retired in July 2006, but continued his research in UNSW and NICTA as an emeritus professor.

Norman was considered a pioneer in artificial intelligence and, in particular, the sub-discipline of knowledge representation and reasoning in Australia. He was highly recognised and regarded internationally.

Polymath, scholar, traveler, commentator, activist and more, whenever he had chance to travel Norman did so, especially while attending conferences or on sabbaticals. He answered the siren call of the classical world of his childhood – Persepolis, Ephesus, Thermopylae, Marathon, Minoa. In the crumbling ruins of the Agora in Athens tears filled his eyes as he stood on the very ground where his heroes, Socrates and Plato, had once trod.

When Norman’s two sons in turn became parents, he worried for the world that his three granddaughters would grow up in. As a member of the Green Party, he campaigned passionately against global warming. Back in his schooldays, Norman once cheekily slipped a rude caricature of the V.I. School Captain under the door of his room. Victim and

tormentor reconnected in Sydney some years ago. All was forgiven and forgotten when it was discovered that both men were now ardent environmentalists fighting for the same cause!

Karma at work, Norman would probably say, for, while he was still guided by the values of Western Enlightenment, he professed an agnosticism that accepted Buddhist morality in most things that were beyond science.

His siblings regarded - nay, worshipped - him as the patriarch of the family. He proffered help and advice when sought but afforded them the leeway and elbow room to live their own lives. Friends and classmates, too, valued his views on just about any subject under the sun. Advice was dispensed freely and humbly, with no expectation of any reward. Gandhian 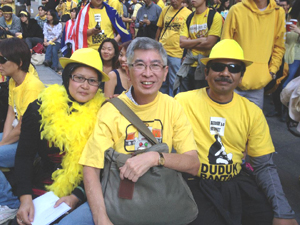 in outlook, Norman dressed as his students dressed, T-shirt and all, and ate in the students’ canteen without batting an eyelid. “How different am I from my students?” he would ask, “Just because I am their teacher, they should treat me or see me differently? You know, there are no class distinctions as far as I am concerned.”

Norman was absolutely colour blind; neither did one's creed matter to him. After all, his own extended family had bloodlines from all over Asia. When he married Yoke Lin, his three groomsmen were a Chinese, an Indian and a Malay. With his deep sense of social justice he cared about the state of the world, especially that of his former homeland, which he visited often. When worldwide 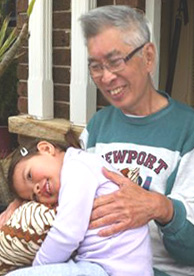 demonstrations were held to agitate for electoral reforms there, Norman dutifully donned a yellow T-shirt and rallied with the Sydney contingent.

In early 2012, Norman learned that he had terminal lung cancer. He continued travelling, participating in on-line forums, railing against social injustice and maintaining a lively Facebook account which drew hundreds of worldwide followers. He took particular pleasure in his final year watching his eldest granddaughter, Lisa, start kindergarten.

Norman touched hundreds if not thousands of lives across the globe. Precocious as a child and gifted in school, he was as yet modest and self-effacing to the extreme. Eschewing all pretentiousness and the trappings of class or station in life, he was a friend and confidant to all - classmate, student, colleague, family member - who knew him. He loved the earth as much, if not more. That earth today is a poorer place without his towering intellect, impish humour and selfless caring. Norman the Hellenophile has finally taken his rightful place in those Elysian Fields he first read of so very long ago.