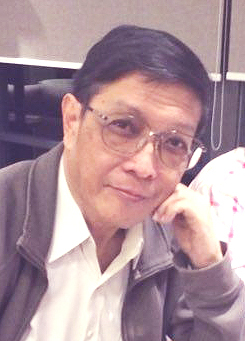 
While most boys his age were playing marbles, Mr. Albert Lim was busy building his first telescope.

It was a crude one, made by mounting several magnifying glasses in a cardboard tube - but it worked. 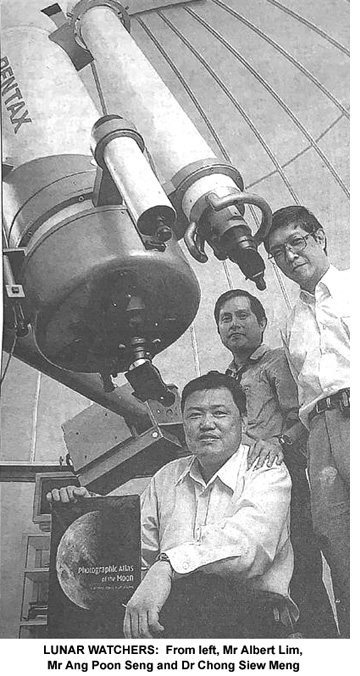 Mr. Lim, who now holds a masters degree in astronomy from the University of Western Sydney, was only 12 then. He said, "We would stand along the corridors of our HDB block staring at the moon with my telescope. I would show my neighbours the moon craters, and they would be amazed."

Laughing, the 42-year-old businessman added, "Sometimes a policeman would come up and ask us what we were doing with the telescope and it would be hard to explain."

Four years ago, Mr. Lim teamed up with two other Singaporeans to produce a book on the moon.

Like him, Dr. Chong Siew Meng and Mr. Ang Poon Seng are both avid astronomers. Their common interest had brought them together through The Astronomical Society of Singapore (Tasos).

Their book, called The Photographic Atlas of The Moon, is a user-friendly guide for amateurs observing the moonthrough a small telescope.

Unlike other moon books, theirs contains lunar images for each day of its 29-day cycle.

Guiding readers across the lunar landscape, the accompanying text is elegantly written and light, even quirky at times.

Dr. Chong, 52, a medical doctor, wrote it to resemble a travel guide: "We want the reader to imagine himself as a tourist, flying over the surface of the moon."

Mr. Ang, who is the vice-president of Tasos, remembers the two years it took them to produce the book. The 42-year-old engineer said, "For the first few months, we would give each other wake-up calls and drive down to the Science Centre observatory in the middle of the night."

But rain and cloudy skies put a damper on their spirits at times.

Mr. Ang said, "We spent more time waiting for the moon to appear than taking pictures of it.

"On those moonless nights, we would doze off as we waited for the clouds to clear. By the time we woke up, it would be sunrise and the moon would be long gone."

When the heavens did smile on them, the trio were kept busy with a 40 cm telescope, borrowed from the Singapore Science Centre. 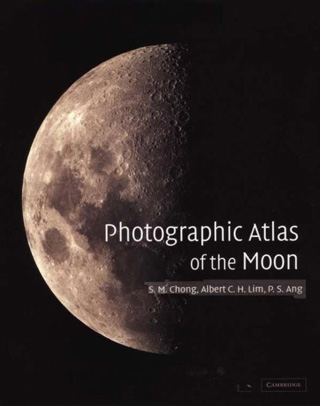 Working with high-resolution low-speed film and a 6x7 medium format camera mounted on the telescope, they captured more than 10,000 slides.

Taking pictures of the moon on the first and last days of the cycle proved to be the biggest headache.

Appearing as an extremely thin crescent for only a few minutes each time, it proved very elusive to locate, let alone photograph.

Mr. Ang said, "Each time we missed it, we had to wait another month. It was a very time-consuming process."

After nights of hard work or fruitless waiting, the trio used to drag themselves off for breakfast before heading for work.

Mr. Lim said, "Our families and friends thought we were crazy."

Smiling, Dr. Chong added, "We were lunatics to write this book. That's why, at first, we wanted to name our book The Realm of the Lunatic.

Mr. Ang said, "We spent several thousand dollars of our own money doing this, but we just wanted to document our own work. It's something to show our grandchildren."

Asked if he would do it again, Dr. Chong exclaimed in jest, "I don't even want to think about it!"

He added, "At the beginning, we were wondering to ourselves why no-one had written a day-to-day guide to the moon before. Now we know the reason..."

The authors are not looking for a windfall from the book. They just hope to inspire people to take up astronomy.

Produced by the heavyweight publishing house, Cambridge University Press, The Photographic Atlas of The Moon is not available yet at bookstores. 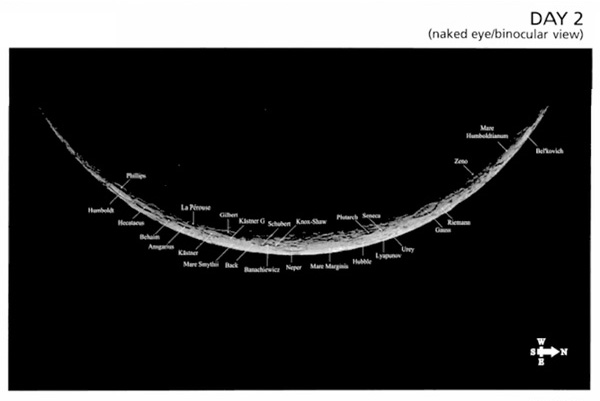 Page from the atlas