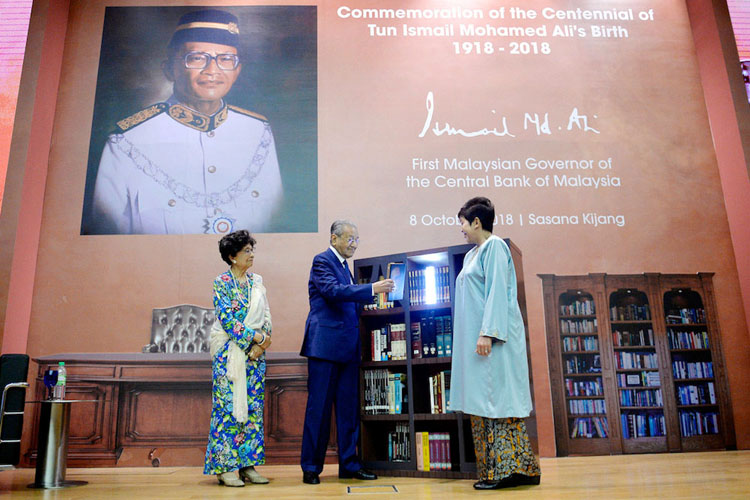 
KUALA LUMPUR, Oct 8 — Despite his reputation as a very strict and fierce person, Malaysia’s first local Bank Negara governor, the late Tun Ismail Mohd Ali, was in fact an affectionate, passionate person and a true gentleman.

In a special tribute to her elder brother in her book, Tun Ismail Ali — Paragon of Trust and Integrity, the prime minister’s wife Tun Dr Siti Hasmah Ali Mohd Ali revealed a side of the former governor which was rarely known.

She said Ismail’s stern and stoic characteristics were shaped by his family upbringing.

“I would like to assure everyone whom had been his victim that what he did to all of you during his time began when he was in the family.

Our father, our parents were very strict and that was made him what he was. He continued to develop his own personality when he left Malaysia to go to England where he stayed for a long, long time,” she said at the book launch at Sasana Kijang, here today.

The book which was to commemorate the centennial of Ismail’s birth, was launched by Prime Minister Tun Dr Mahathir Mohamad.

Dr Siti Hasmah said Ismail whom she affectionately called “Abang Ngah”, was also a man of few words and recalled that when she had finally graduated from medical college in Singapore in 1955, she received a telegram from Ismail which simply read: “At last, we have a doctor in the house”.

She also shared with the audience another occasion when she was urgently summoned by Ismail to his office in Bank Negara.

“Before I could even sit down, he asked me: “Hasmah, where did Mahathir get the money to build that house? I was stunned and I explained to him that we had sold our house in Alor Setar, and now that Mahathir was in the government, he could get a loan from the government for the new house.

“Satisfied by my explanation, he simply muttered, “Mmm”. And just like that, I was dismissed with a “Mmm”,” she said.

The book which was in three parts, chronicled Ismail’s life, his early years, during the Second World War, and his years as the governor till his death in 1998, at a ripe age of 79 years old.

In the 211-page book, Dr Siti Hasmah also penned Ismail’s love for cigars and his loneliness in the years that followed his wife Toh Puan Maimunah Abdul Latif’s death in 1996.

“I can assure that although he was strict, super fierce personified, but deep in his heart, he was affectionate to all of you. He wanted Bank Negara to be proper and the best in the world like any other central banks,” she added.

Born in 1918, Ismail was the second of 10 siblings. He began his early education at the Victoria Institution in Kuala Lumpur and later pursued his tertiary education at Cambridge University under the Queen’s Scholarship.

When Second World War broke out in 1939, he was working a news reader and commentator in the Malay section of the BBC in London.

In 1946, he returned to Malaya and served in various positions in the government before being appointed as the first Malaysian Bank Negara Governor in 1962 taking over from Tan Sri WH Wilcock, who was an Australian. Ismail retired in 1980. — Bernama.